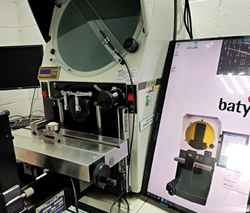 The tolerance of every component made, therefore, must be met with exceptional accuracy. The components had proven difficult to measure with more traditional methods of measurement such as CMM machines or calipers, as these require the parts to be touched, therefore increasing the likelihood of the component becoming distorted, damaged, or out of tolerance.

As part of the Bowers Group, the team at Baty upgraded Bowers & Wilkins’ existing Baty R14-GXL to the R14-FT2E, meaning that the company now benefits from the Fusion 2D touch screen DRO and optical edge detection not offered on the previous model. David Naylor, Quality Supervisor at Bowers & Wilkins said: “Highly accurate, perfectly made components are essential for the quality of our products, and the Baty unit enables us to meet those standards by ensuring repeatable and accurate measurements.”

The company previously had an R14 GXL Shadowgraph for over 25 years, but the DRO on the Baty R14-GXL had developed a small fault after decades of use, prompting Bowers & Wilkins to look into options for replacement. After receiving an email from Bowers Group regarding its retrofit services from the team at Baty, Bowers & Wilkins decided to upgrade its existing machine, dramatically enhancing the functionality, accuracy, and usability of the profile projector without the massive expense of a brand new machine.
“We’re very pleased with the retrofit” said David. “It has completely solved the problems with the old DRO and made the unit function like a new machine. It’s still very user friendly, and the operators are able to use it comprehensively with fairly basic training.”

David continued: “We’d never had the optical edge detection until the upgrade; it has significantly increased the speed of the measurement process, and the touch screen really is easy to use.”
It is visually very important that Bowers & Wilkins products are well made, and also very important for the sound quality. Meeting tight tolerances is essential so that components fit together well; both from an aesthetic point of view, and to ensure that the sound quality of the products is perfect.

For example, a Bowers & Wilkins diamond dome tweeter loudspeaker contains voice coils. The dome tweeter is constructed by attaching a voice coil to a dome, which is then attached to a magnet. The dome itself is made from synthetic diamond, which is structurally very stiff, but also delicate. The diamond dome fits into the voice coil, which sits in a magnet. It is absolutely imperative that the coil is within tolerance, otherwise it runs the risk of cracking the dome, or even rubbing on the magnet; distorting the sound and diminishing its quality.

Baty’s Fusion software includes a touch screen DRO which can be fitted to existing Baty, Starrett, Deltronic and Mitutoyo projectors, quickly and easily. As a simple plug and play retrofit, it improves speed, accuracy and ease of reporting for 2D measurement, and the screen mounted optical edge sensor also eliminates problems with operator influence. Time and date stamped reports can be created, including dimensioned drawings generated as standard PDFs.